In 1980, Cathy and I were fortunate enough to take a Caribbean cruise. One of our cousins organized the whole thing, and the more people we could enlist to go, the cheaper everyone’s fare would be. It was a fantastic time, and I still remember it like it was yesterday. I won’t bore you with the travel itinerary, just tell the story for the writing prompt.

Two young men that we’d known for most of our lives accompanied us on the cruise – David and James. For the entire eight days of the cruise, after the evening meal, we’d head up to the Lido deck because it was always deserted afer sunset, where we would drink and smoke weed until two or three in the morning, then stumble our way to bed. We had many indepth, philosophical discussions… and found out a lot about one another. It was a good time.

On our last night aboard ship, we’d just settled into our seats and were getting ready to get lit. Jim noticed something in the sky and pointed it out to the rest of us. The best I can describe, it was like looking at a the old Simon game everyone played as kids. 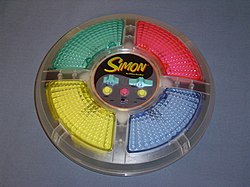 After we all noticed it and watched it hover in place for roughly a minute, the lights began blinking furiously, then it took off. I kid you not, there were light trails, just like in the Star Trek movies, when they are in warp speed, and it was gone. poof! As if it had never been there at all. The whole process of blinking lights, light trails and disappearing took less than three seconds.

We all described the same thing to one another, and then, the next morning, we discussed it again. All of our memories matched.

Now, whether it was a weather balloon, an experimental military plane, or an honest-to-God UFO, I have no clue. But, I saw it. I saw it in the sky!

Today was the last day for one of my team members, she’s staying with the organization but moving to a different team in a different building. We had a carry-in lunch with lots of wonderful stuff, and we all chipped in a few bucks and bought fried chicken from the deli at a local grocery store. It was a nice day, we had a lot of fun, but then it was sad when she packed up her things and left.

This song is one my favorites by Leonard Cohen, but in light of recent events, I thought that posting Julie and Perla seemed appropriate…

I can’t run no more
With that lawless crowd
While the killers in high places
Say their prayers out loud
But they’ve summoned, they’ve summoned up
A thundercloud
And they’re going to hear from me

Hi Mike! This is Connie, long time listener, first time caller, love your show! I’d like to make a dedication to The Donald on his yuge (it’s true) inauguration.

That was the prompt, that one word. Immediately I heard:

Yellow — I loved and still love this song. Sean and Leslie would always laugh at me because when it came on the radio or television, I’d make everyone be quiet so I could listen. They would tilt their head to the side and bob to the music, I guess imitating me.

The lyrics don’t make a lot of sense, it isn’t touchingly romantic; however, the melody and Chris Martin’s vocals inspire a dreamy, warm feeling. Truthfully, I can’t say it invokes a specific memory, I can’t associate it with a person or time period. It just makes me feel sentimental and happy…

January 12, 2017 – The Writing Room – A djinn granted your wish to build your perfect space for reading and writing. What’s it like?

This… I can’t even

“Almost everyone thought the man and the boy were father and son.”

It’s no secret that I’ve been a Stephen King fangirl since 1973. Carrie was the first book I read, but ‘Salem’s Lot got me hook, line, and sinker.

Though his stories are often fantastical, King writes people better than most. His characters are people we know, sometimes, they’re us. Their interactions and relationships, and most especially, reactions to the events unfolding.

Jeffrey Deaver said: “singlehandedly made popular fiction grow up. While there were many good best-selling writers before him, King, more than anybody since John D. MacDonald, brought reality to genre novels. He’s often remarked that ‘Salem’s Lot was ‘Peyton Place meets Dracula,’ and so it was. The rich characterization, the careful and caring social eye, the interplay of the story line and character development announced that writers could take worn themes such as vampirism and make them fresh again.”

So, yeah. Ben Mears takes responsibility of Mark Petrie after they escape, then a year later, they return to finish what they started…